The Occupation Museums of Eastern Europe

"I have a story to tell you." In front of me was a very old man, perhaps in his late 80's, bent over with scraps of white hair protruding from a green military-style cap propped a bit sideways on his head. It was decorated with what could only be home-made badges. His story would turn out to be the most courageous tales I have ever heard on my travels.

Earlier that day I found myself walking up to a very ordinary looking building on the outskirts of Tallin. It was supposed to an "Occupation Museum." I was not sure what I would find there, but the previous night I had met a cute girl who said she would meet up for drinks, but only if I had "a clue" about Estonia. Yeouch. So now, here I was.

The inside of the building was stuffy and dusty. Displayed in a heap under glass was a collection of Soviet era passports, ID cards, and black and white pictures of men in various uniforms.

Next to me was an old man, looking back at me. His eyes were bright and curious. I said hello, he responded with the typical good English of the Baltics, we chatted the usual introductions. Then he leaned towards me and said, "I was a Forest Brother. Do you know what that means?" And thereupon he told me the most incredible true-life tale I think I have ever heard.

For someone like me, who has been to Auschwitz and seen the fingernail scratches inside the gas chambers, who has been to Berkenau, where the top layer of soil once consisted of nothing but human ash, it is impossible to describe with words. Simple words against that mind-bending hellscape. To be truly understood, one must travel there and feel it. It surrounds you like a dark cloud. Heavy. Impossible, yet real. It twists and burns your mind. And then you cry. A moment later, you notice everyone in your group is quietly weeping with you.

The good thing, I suppose, is that the Holocaust will never be forgotten. Yet, today I'm here to talk about another tragedy. One that went on for much much longer, affected even more people, yet has been mostly forgotten by the West. Ironically, and perhaps more cruelly, perpetrated by the very liberators of Germany themselves.

I am referring to the Occupation of Eastern Europe.

The end of the second Great War was the start of a new American era of prosperity and peace: America's golden age. During this same period, the experience in Eastern Europe was so different that it is almost impossible for an American to fully grasp. The Americans and British didn’t like that Russian armies occupied the East, but these same armies had helped bring down Hitler. So, three men signed a piece of paper that essentially recognized the current occupations of the two armies. The Americans and British would rebuild the West including West Berlin, and the Russians would rebuild the East.

We know broadly what happened next. American forces were happy to retreat back to America, providing primarily financial assistance to Western Europe. Reconstruction money flowed even into Western Germany, with recognition that sucking an enemy dry after defeat led, in no small part, to Hitler in the first place. But in the East, something entirely different was unfolding.

The Soviet armies occupied the Baltics, Poland, Eastern Germany, Austria, Hungary, Czechoslovakia, Bulgaria, and Romania. In country after country, a communist puppet regime was installed. To their credit, the people of these countries did not take Soviet occupation lying down. Notable among the resistance was the Hungarian rebellion of 1956. This was quickly crushed by a massive force of 17 Russian divisions. Tanks, artillery, and aerial bombardment fired indiscriminately throughout the highly populated urban center of Budapest. Thousands of civilians were killed.

However, the people of the Baltics (Latvia, Estonia, and Lithuania) and Poland probably suffered the most in the early decades of occupation. Despite resistance by the "Forest Brothers" and other armed groups, these countries were annexed into the Soviet Union. Farmers were forced off their land to collectives which caused economic collapse. Citizens were drafted or arrested, especially those of higher education who could lead political resistance. However, by far the biggest atrocity during the long decades of occupation was the forced deportation of hundreds of thousands to Soviet Gulags.
The sprawling GULAG (ГУЛАГ) system of forced labor camps was not new. In the beginning, Stalin used the camps within his own country to exile political dissidents and intelligentsia. Over the years, the system grew until camps were strategically used to mine resources or manufacture goods: this "golden sweat" became vital to the Soviet economy. Stalin's Great Purge in the late 1930's filled these camps to capacity.

Thus, it was really no suprise that after the war that the Soviets looked to their new terrorities for labor. Virtually all of Poland's military officers were murdered (the Katyn Massacre) or exiled to gulags after the war. The Baltics were not spared either. The gulag system grew to approximately 2.5 million prisoners by the early 1950's. Many freed Soviet POWs found themselves branded "traitors." It is estimated that up to another 1.5 million Russian POWs were also sent to the gulags.

At the time I met this Estonian real life freedom fighter, I didn't know much about any of this. I guess it had never occurred to me that anything could have been worse than the Germans. He explained the Soviet Occupation was much much worse, because it lasted three generations. He shuffled over to another counter and pointed to one particular picture of three scruffy young men holding hunting rifles in an open field. I looked closely. And then back at my new friend. There was no doubt. One of those men was him. Standing alongside his Forest Brothers. 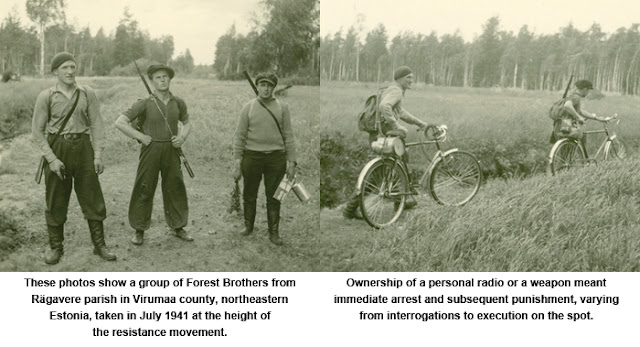 He explained to me that the young kids in the town, born in the 80’s, didn't really understand.


"It is hard to explain what happened. They didn't see their friends disappear. They don't get it. And, I guess ... I don’t want them to share this burden. I want them to be happy and enjoy their freedom.”

It was very powerful. Hearing these words, from this man. I tried to imagine what it must have been like. Standing with a few friends in the woods against the combined might of the Soviet empire. Would I have been able to do this? I wasn't sure I wanted to know the answer.

Many things suddenly became clear at that moment. Why the old men and women in town seemed so beaten and downtrodden. And why the young generation seemed the polar opposite. So carefree and fun and liberated.

I think today about Russia’s occupation of Crimea, and the looming threat Russia poses, once again, to these happy little Baltic countries. Would NATO turn their back? It’s not clear at all, in today’s fractured America, divided EU, and resurgent Russia. For these countries, living in the red shadow, perhaps it makes their freedom that much sweeter. Because they realize it can be taken away so easily.
Posted by onedumbtravelbum at 2:36 PM