Adrift on the Rails: from Asia to Europe

I was adrift on a spaceship, hurtling through space and time, detached from planet Earth. Outside the window the earth whirled by. A field, a town, a church. Then an almost identical field, town, and church, as if I was in caught in one of the those old Road Runner cartoons where the background is on repeat.

Today was Day 6 on the Trans-Siberian. I was in Russia, but I was not IN it. Instead, my body was encased in this bubble train, neither here nor there, passing through but not touching, smelling, hearing, or tasting. At times I felt like I was on the Starship Enterprise and we were at warp.

The stars slide by effortlessly, you see them pass, wondering what is going on in each of them... are there families there, living out their lives? What are they doing, this day you fly by? What would it be like to stop and visit, to eat with them, to hear their stories? 7 time zones, thousands of miles, millions of people living on the land I crossed on this journey, and I had met less than a handful.

But as Jack Johnson said, these tracks don't bend somehow, and I got no time to get where I don't have to be...

Russian train stations are like nowhere else I have ever been. Freshly painted in Wizard of Oz pastels and white trim, they cheerfully welcome you to each new city. 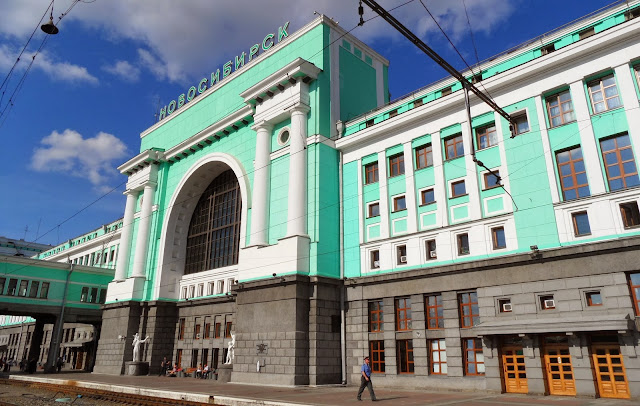 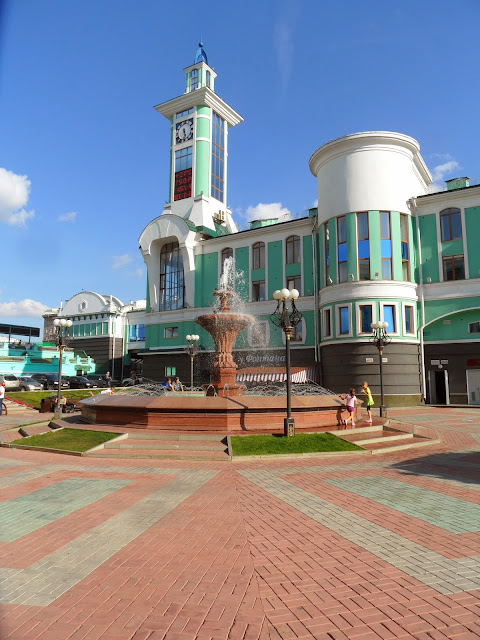 I could not wait for the great moment when we crossed the Ural mountains and entered into a new continent: Europe! I watched the kilometer markers, set by our distance from Moscow, drop one-by-by until according to my guidebook we would break through the invisible barrier. 3-..... 2-..... 1-..... I trained my camera on the window, ready for a spectacle. And then..... a tiny little obelisk whizzed past, gone in a second. Whaaaat?! Was that it?! I looked at my camera, the stupid thing was blurred from the motion.

Huh. Welp, I guess I was now in Europe. So much for the mighty Urals, which turned out to be mounds of dirt. Calling them "hills" would be generous.

Maybe I had secretly expected balloons to fall from the ceiling. At the very least, someone to look up and say to me, "Right-O Mate! After 6 months in the Orient, you are back in the good old Western Hemisphere!! Congratulations, ya made it you old dog! Welcome Home, here's your free Hot Dog and a real sit-down toilet. Enjoy!"

Instead, I looked across my cabin at a single old man, staring back at me with a little crazy in his eye. And then, he did something quite bizarre. Grinning, he pulled a velvet bag out from under his seat. He said something questioning in Russian, waiting expectantly. I had absolutely no clue what he meant. So, I just nodded and said, "Da."

This was apparently the correct answer, and he began telling me a long story, all in Russian. Now, this is not the first time traveling where an old man or woman next to me on a train begins telling me their life story as I nod knowingly, not understanding a single word coming out of their mouth. But for me this is fun, because in my mind I get to make up whatever story I want. Here's the translation I came up with as he prattled on in Russian:

<Russian-accent> "You look like good boy. My name Boris. I come from long line of reindeer herder. My son not want to herd reindeer. This make me very upset. You know this feeling?"

He perked up at this acknowledgement. "So I decide I go into Army. There I meet beautiful wife Olga. She has 3rd nipple, do not tell anyone zis!" He chuckled and waited. I laughed and squinted back: "Da, da" again nodding.

He paused and leaned in, lending dramatic effect to this next part. "But, circus come to Boris' town, and Olga, she run off with knife juggler!! Can you believe zis??!" He raised his eyebrows and waved his hands. I gave my best pitying look.

"So, I am on this train today to take my revenge! Ha!" The crazy look had returned to his eye. I didn't know what to say. He opened the velvet bag, and out came a huge knife with a hilt made of antler. My jaw dropped. This was way, way too weird. My fun little translation game had suddenly, scarily, come true. He jabbed the knife in the air a few times, then slowly slid it across his neck, as if slitting a throat. "Good knife for killing thief who stole my sweet chubby Olga!" I didn't have do much fake translating on that last one.

This seemed to please him, and he handed the knife to me. The antler could have indeed been of reindeer. I gently held it, noticing the swirling patterns engraved in the antler, the sharpness of the serrated blade. And realized that this unhinged old man with a huge antler knife, who had just mimed slitting a throat, was my cabin buddy for the night. I had a few precious pills of Xanax that I used for sleeping on long flights and surviving horrible long bus rides. And took two.

Soon we neared one of the great highlights of any Trans-Siberian, the crossing of the mighty Volga River! The Volga is steeped in lore for Russians; it is to Russia what the Mississippi is to America or the Nile to Africa. You may be surprised that it is not the Danube, but instead the massive Volga spanning 2300 miles that is the longest river in all of Europe. It was upon the corridor of the Volga that wars were waged, the Golden Khanate of the Mongols established, and the Russian empire built. Russian affectionately call it Mother Volga, and men supposedly tip their caps as they cross in salute.

At the actual crossing, everyone swarmed the windows to witness the moment, and I joined them. It is not everyday you cross one of the great rivers of the world.

Today was my final day. As we neared Moscow, the train began to fill with more and more people. Soon we entered suburbs, then satellite cities, and finally we entered the outer edges of Moscow itself. My crazy companion with the knife was now only a memory. So too was the shy mother with her cute little children, the drunken gun-toting soldiers, my bored babuskha waitress with the overly made-up face and enormous wobbly wig, the rude stewardess who came to (affectionately I hope) call me мальчик, or boy. Too soon, the train was elbow-to-nose with "busy-bodies," commuters, yapping on their phones and bumping into each other. The very people I had purposely left behind for so long. Did any of them know I had traveled here all the way from Beijing, on this very train?! Did any of them know the overwhelming emotion I felt at reaching this point? The man in a suit next to me looked up from his phone, examined my ripped clothes and beard, and shook his head.

Gone were the days spent in meditation as the movie played through the windows, plunking on the guitar, writing in my journal, falling asleep to the soothing clickety-clack of the old cars, snuggled in bed as an entire continent rolled through my dreams. The sun dipped, night fell, the train slowed. Then, it stopped for the final time. Outside was a huge neon sign: "Москва".

Just like that, my great Trans-Siberian journey was at an end.

Posted by onedumbtravelbum at 9:49 PM