Another day of sweet and sour.  The morning was clear and full of amazing.  A breakfast table was laid at the edge of the cliff above a deep valley.  With hot tea in hand, a small group of us sat at the table and watched the sun awake.  The dawn came behind a silhouetted Fishtail which was now much closer than before.  The rays hit Annapuran South, now only a single hill separating us, and then Hiun Chuli (6434m / 21,200') to its right.  The view in some ways was better than Poon Hill since the mountains were much closer.  It felt like you could chuck a rock and hit Annapurna S, even though it was miles above.  I studied the glaciers and ice falls tumbling off the face, the east ridges lit with the suns rays.  Finally sunlight peeked above Fishtail's shoulder and we began to warm.  The valley's green appeared, a pair of hawks awoke and took flight, floating on the warming air.  We all sat in silence, enjoying the show.  But nature wasn't silent.  Birds chirped, a rooster crowed good morning somewhere near, and the noises of the morning jungle wafted up to our perch. 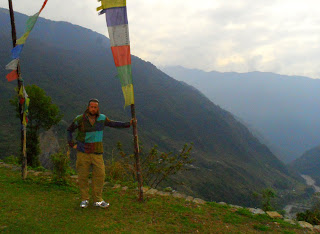 I had pow-wowed with Dipu, he had called me out on my idiocy.  "Nemo, I tell you as friend, not guide.  I see you walk.  ABC (Annapurna Base Camp) not good.  You go up, maybe you get there.  But, then you have go down.  Two days down, 6 hours both day, no horse.  Not good for you."  So I was bummed out.  ABC would be only 2 days away after our walk today!  It seemed so bizarre to turn away when I was so close.  But then, the light-bulb went on.  I had a classic case of "summit fever".  And as everyone mountain person knows, summit fever kills, and most deaths occur on the way back down.  Dipu was right.  The Annapurna high country would have to wait.  Feeling depressed, I silently vowed to return soon.

So with the rocks in my head adjusted, we finished breakfast and started the 2 hours down to the river valley below.  That of course meant no horse.  At first it was pretty crunchy but after a bit my leg warmed up, the Advil kicked in, and I started to make decent time.  In fact, I started feeling so good that the idea of ABC started to not seem like such a stupid idea.  After the river it was back on Kalu.  This time Deepak said he trusted me enough and so I rode alone up the steps.  It was a nice change being in charge of Super-Pony, I was a bit less of a passenger and was actually doing something.

The valley on the way to Chhomrong is ripped with huge fissures along either side.  These monster landslides were right next to rice terraces.  I asked Dipu about the one right across from us, it started as a small rip in the top, widened until it suddenly dropped a thousand feet as a sheer cliff, and ended as a huge pile of rocks on the valley floor.  A new waterfall sprinkled down one side of the brown scar.

"Yes, there was house there.  Now, noone can live."

"Did anyone die during the slide?"

And that was that.  The villagers just kept farming right next to where their neighbors had plunged a mile to their death.  I looked again at the rice terraces, stretching up from the river valley almost to the top of the cliffs.  The amount of water needed to grow the corn, rice, and potatos must surely soften the soil.  Dipu agreed.  But how else could they live?  They had to eat.

The trail abruptly went upward, and I noticed that the trail also went straight but was blocked off.  Dipu noted that a landslide had recently occured and now we had to go up and over.  The path narrowed to a few feet in places, where atop Kalu I nervously watched the horse tiptoe on the edge of a blind precipice.  It had to be a thousand feet high.  On the way back down I saw it.  We had indeed been walking above an overhang, the side of the mountain had fallen away.  At the top, comically perched like a weight, stood a new guest house to service the updated route.  I saw certain doom waiting to happen, the Nepalese saw business opportunity.

The afternoon clouds and rain were starting to set in when we reached Chhongrom, just in time.  A large pack of Korean tourists were having a big boisterous lunch, drinking Korean whiskey and eating Korean food.  The 15 of them had brought along 25 porters, their own cook, their own food, and 450 bottles of Korean beer.  It was the Nepalese equivalent of the Japanese tour bus.  It was kind of fun seeing the crowd partying, but when they started to pack up I felt relief.  The whole point of trekking Nepal was to challenge yourself in the middle of the most spectacular scenery on the planet, and maybe find a little spirituality in the process.  So to see a herd of Koreans, long-lenses glued on to each and every one, romping through like they were on a beach holiday was not a pleasant sight.  As their leader herded them up and out, the rain turned into a downpour and hail started falling.  But the Koreans were not deterred, they had booked each stop on their route months in advance and had to keep their appointments at all costs, hail or no hail.  As they trooped off and started to get pelted, Dipu and I laughed and happily waved goodbye.

That evening as the sun set we had a treat.  The clouds parted just for a few minutes, blue sky appeared, and Annapurna South, Hiun Chuli, Fishtail, and Annapurna III way off in the distance were capped with golden light.  A special moment.  But before I could walk outside and get a picture, the clouds came back and the sunset ended.  I remember one time in Thailand I was snapping a picture of one of the most amazing sunsets I had ever seen, the whole sky was a pink purple, the low-tide ocean was the same color, and limestone karsts were silhouetted on either side.  It was a painting by the Master.  A friend next to me had no camera.  He pointed to his head, "This is just for me.  I don't need all these pictures.  I only want to enjoy the moment."  At the time, I thought what a poetic thing that was.  But years later, I was very glad to have that picture.  When I look at it a flood of memories pour forth, and that particular sunset, with its crazy colors, is something that otherwise would have faded in my mind.  And so, I was a little disappointed I didn't get that once-in-a-trip photo.  But it was OK, maybe it was just for me after all.

Posted by onedumbtravelbum at 5:05 AM