It wasn't quite War and Peace but today was the best day and the worst day.  Ghorepani is the trekking nexus of the Annapurnas.  There are people cruising down from Jomson who flew in, folks tramping up to Jomson and perhaps beyond for the full circuit, and a mass of shorter-term trekkers that will either head east for Annapurna Base Camp or turn around and head back after climbing adjacent Poon Hill.  From atop Poon Hill was supposedly one of the greatest views in the entire Annapurna trekking region, and I was determined to see it.  There was only one small problem: no horses were permitted, it was a "national park".  The path went straight up for an hour, and of course this implied an hour back down.  Doh!

But I had ridden Kalu for almost the entire day yesterday and after soaking my foot in the glacial melt for a bit I thought perhaps I had a chance.  As with any "summit" attempt, the idea is to head off in the dark and reach the peak at dawn.  Pre-dawn usually means calm weather for mountains around the world for some reason, and there was of course the bonus of watching sunrise over the roof of the world.  I woke at 4am, I wanted to beat the pack a bit and I knew I would take a long time if I made it at all.  We set off in the dark, my foot felt surprisingly good and we managed to cruise up at a decent pace.  By the time we neared the top I was in pain, but it didn't matter.  I was going to make it.  We were passed by two people hauling ass, but it turned out they were locals and had setup a tea shop by the time we arrived a few minutes later!  Ahh, nothing better than hot tea at 5am to warm up in the chilly twilight!

I looked around at the stars in the sky, and on the horizon stood large black lumps that must be the Himalaya.  Just the day before apparently it had been socked in, lucky spirits were smiling for us this morning.  Slowly the sky brightened and a line of headlamps came up the hill to join us.  And in a few minutes the Lords of Nepal began to take shape.  It was impressive.  Massive Dhaulagiri (8172m / 27,000') and a few sister peaks stood directly before us above a vast valley.  Much closer to us on the right loomed Nilgiri and the huge Annapurna South (7219m / 23,800').  Annapurna South rises up directly from the deep valley a mile below us to an incredible height miles above, you can see nearly the entire rise.  And to its right, lower in the sky but sharp and ominous like a shark's tooth was Machhapuchhre, or Fishtail, its twin peaks only 4m different in height (6997 and 6993m / 23,100').  When you are in Pokhara, Fishtail is the biggest mountain in the sky because it is the most southern.  But from Poon Hill, you can better appreciate the fact that is the little sister when it comes to the giant Annapurnas.  Its unfortunate that you cannot see Annapurna I (8091m / 26,700'), the king of the the Annapurna massif.  Dhaualgiri is taller but it is separated from the Annapurnas by the deepest gorge in the world, the Kali Gandaki Nadi.  The Kali Gandaki river flows at around 2500m surrounded on both sides by 8000m peaks.  The difference of 5500m is equivalent to about 3.5 miles.  In other words, the gorge is deeper than 3 Grand Canyons stacked on top of one another.  It is something that a human brain has difficulty comprehending. 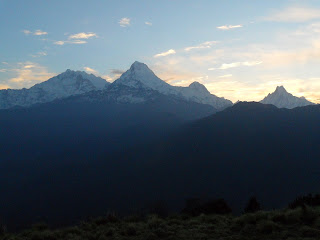 From atop Poon Hill, the only thing that comes to mind are silly words like 'awesome' and 'holy f-ing crap!'  Finally a ray of light appeared on Dhaulagiri's peak.  The show had begun.  It is strange watching our star's rays rise to touch the top of a huge mountain.  Much like the sun seems to drop like a rock once it touches the ocean, so too did the light spill down the face of Dhaulagiri, almost fast enough to see it move.  A few minutes later, the sun touched Annapurna South and then Nilgiri and finally Machhapuchhre.  It occurs to you that its easy to tell which mountains are the tallest: simply watch a sunrise.

The colors were not as pink as what I'd seen at Mt Fuji, this was more golden yellow.  But in terms of spectacle, it was one of the greatest I'd witnessed in a long long time.

Once the sun rose a bit more the show was over, the golds and yellows were gone.  Reluctantly the pack began to trudge back down to Ghorepani.  But it was just the start of the day, another 4-5 hour trek still stood ahead for most everyone including myself.  After limping down and a great breakfast of muesli in hot milk with eggs and instant coffee, we were off. 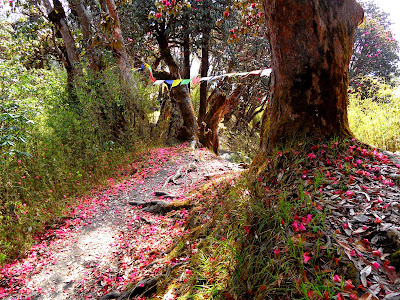 Kalu was able to take the first shift, we were headed up over the Deurali Pass (3090m).  The trail wandered through more mossy contorted trunks of tall rhododendrons, this time they were in bloom and the patchy light of the trail was carpeted with pretty pink flowers.  Finally we crested the pass, and I have to say that the view was in some ways even better than Poon Hill.  From here we could see straight down the valley and Dhauligiri rose directly behind.  We rounded the ridge into the next valley and I was not prepared for what I saw.  A large open space ahead was carved out of the rock by two rivers, and we stood on an impossibly high cliff somewhere above where the rivers met.  Steep forested cliffs plunged straight down and disappeared below on all sides, and in the distance the combined river carved out a deep canyon.  Dipu, my guide, pointed out a tiny village way off in the distance glued to the cliff.  "Ulleri."  Yes, it was indeed.  The village we'd humped to straight up a cliff a couple days ago was below and off in the distance, barely discernible through the haze.  Dipu joked we could bungee jump off our perch.  I replied we could base-jump.

But that's where the fun ended.  As my guide warned me, "horse go up, horse no go down."  Ahead of us was an hour and a half descent into the massive gorge we had just seen.  I had developed a sort of technique for down-climbing, where I leaned on my poles and kept my toes over the rock steps to prevent my heel from coming down.  In this way I didn't stretch my achilles too bad.  But after an hour, nothing could stop it from starting to make that crunch noise.  I had to stop.  Ahead of me the path plunged straight down a row of steep steps with no end in sight.  I suddenly felt very depressed.  What the hell was I doing here?  Why was I torturing myself? Nepal wasn't going anywhere, I could always come back next year when I was healthy and do this thing right.  But instead I was grinding salt into my injury with another 8 months of travel ahead of me!  I could have stayed on that beach in the Philiippines and healed up properly, swimming every day, watching sunsets on the floating bar every night.  Instead I was fanatically attempting to snap off one of the biggest tendons in the human body somewhere in the bowels of a Nepalese jungle.

Somehow I made it down, and Kalu faithfully carried me back up the other side to Tadapani.  I just finished soaking my foot in the glacier water and its starting to feel better.  And I have a big decision to make.  Do I push forward against all odds of success?  Or do I throw in the towel, retreat to Pokhara, and console myself with some future return trip?  At least that way I can try to heal up a bit before China.

All sanity and reason says the latter.  But some primitive cave-man inertia in my animal brain wants to keep moving forward.  I'm so close.  I'm not sure why I listen to that voice.  Tomorrow the answer will come, one way or the other.

Posted by onedumbtravelbum at 4:08 AM