Fidel Castro, a Hot Date, and the Meaning of it All

She looked at me from across the smoky bar.

I quickly double-checked my outfit.

It was Friday night and time to parrrrrrty in St Petersburg! Earlier I'd hit the streets with a couple fun hostel-mates and we began a walk to the bar district. On the way we ran into a few Russians in a great mood, singing and swinging a bottle of something in a brown bag. I climbed up on a giant rearing horse adorning a bridge, started slapping its behind, and gave the universal sign-language for "Can you take a picture? I'm doing something really stupid!" This inspired them to take the same picture, and after about 5 minutes of me taking all 3 of them in standard "I'm-so-sexy" Russian poses, we were all best friends forever.

We made it to the bar district and, instead of going in, the Russians went to the curb and joined about 50 other chain-smoking Russians also holding brown bags. I laughed and asked what kind of vodka they were drinking. My new Russian friends said, "Russians no drink wodka! This is American idea. Vee like Cognac." And indeed, the bottle in Cyrillic said коньяк. Russians apparently loved the sweet crap. And I couldn't blame them, after all, cheap gasoline-flavored vodka night after night probably turns your insides into fresh steamy roadkill.

I looked back at the blonde at the end of the bar. She disappeared for a moment, then emerged from the crowd and took the empty stool next to me.

"I heard you talk. You are English?" she said in a strong accent.

"America?! Wow. You have wery long beard and hair. Why you here?"

"Well, ... it's a beautiful city." I had had more than few shots at this point. I looked at her and smiled. "With beautiful girls. Why not?"

Her blue eyes looked back at me. I was a deer in the headlights. She waved her hand at the crowd and said, "Russian girls ... drink too much, smoke too much, ...... sex too much. This is problem."

It was the single best line I'd ever heard, delivered from the most beautiful person I'd ever seen.

I nodded, eyes wide. She lit a cigarette and took a drag. And then motioned for the bartender. Two shots of clear liquid appeared. We tilted them back. She looked at me, waiting. The only thing clever thing I had to say was a joke about two lesbian dinosaurs. And no clue how to say it in Russian. So instead I grabbed her hand and we went to the dance floor. And I thought, well, so far she is a good Russian girl. She smoked, she drank, ... my night was looking super awesome.

Two songs later, somehow she was making out with a tall stranger and I was dancing with an empty beer bottle. Her earlier statement wasn't that prophetic after all. Damn.

But the night was not a loss. On the floor was a cute girl with curls dancing and giggling like it was her last night on earth. I said "Privyet," and she said "you're the Ameerrrrrrican! Hahahahahaha!! I heard you talking earlier." Her English was perfect.

At the end of the night, she told me she was a tour guide and to come visit her at Pushkin, a wonder of Russia. Pushkin had not been in my plans, but yeah. It was now.

The next day, head pounding, I popped out of a subway station in the middle of a generic looking suburb. I looked around for the girl from last night. And looked. And realized this was ridiculous. How would she find me in a crowded street? What the hell was I doing here?

"Hello Nemo!" came a voice behind me. I turned and found a girl. Her hair was straighter, and instead of a tight dress she wore jeans and a colorful top. But that bubbly smile was her.

We spent the day in beautiful Pushkin, which contains an enormous imperial park that is now open to the public. There are pretty lakes and tree-flanked canals and candy-colored bridges, beautiful fountains and artists painting landscapes and musicians, and in the center of it all: the jewel of Catherine Palace. It bears a striking resemblance to its famous twin, the Winter palace in downtown St Petersburg. Probably because they were both designed by the over-the-top pimp-master Rastrelli. If you wanna pimp yer palace, have an Italian build it. 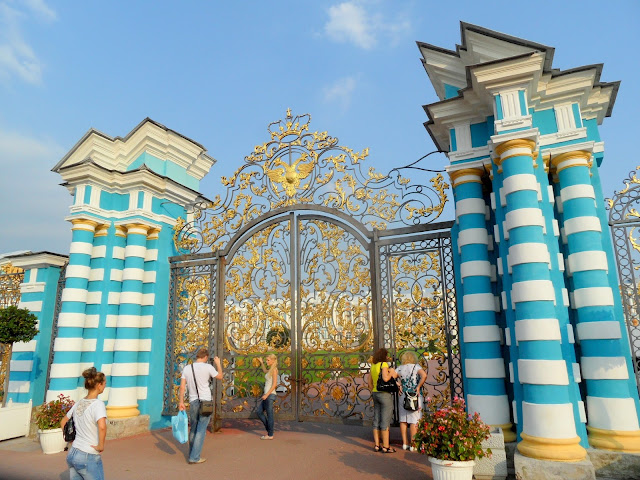 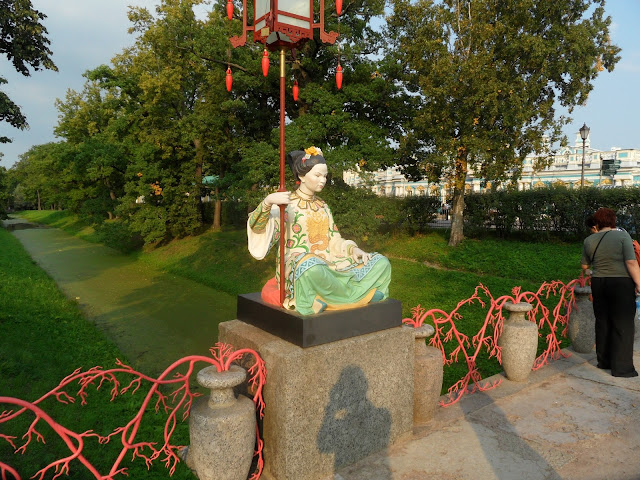 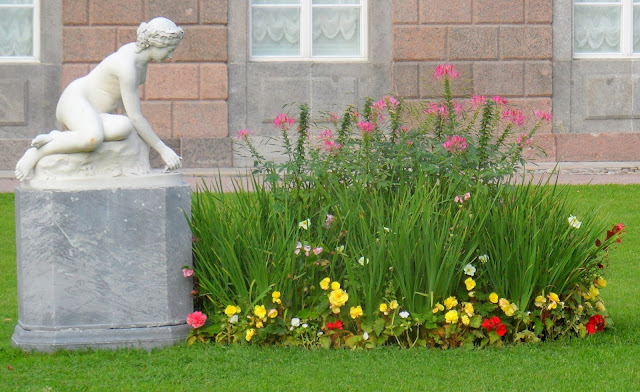 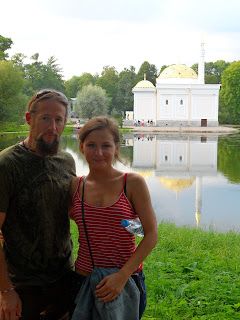 In the evening we ended up at a lake called the Admiralty, fronted by old trees and pretty sculptures. It had been a beautiful day with a beautiful person.

I wanted to see her again.

We stayed in touch for a bit, and I almost convinced her to come visit me in Egypt on the Red Sea. A few months later I checked her Facebook status and saw she was married.
Married? So quick! And it was not the first girl I'd met in Russia who ended up married not long after I'd met them.

I did a search online, and apparently the average age of first marriage for a woman in Russia is 24.9 years old. In the US it is 27. Norway, by comparison, was 31.4. The mid-20's are prime years, important years for partying, for travel, for building a career, for going on adventures. Did the women in Russia want to get married young? Or was it cultural pressure?

Another mystery of the Great Red Bear.

I couldn't help but feel a little strange over it all. Traveling by oneself is rarely lonely. It is shockingly easy to meet friendly people when you are solo overseas. But there are also too many times when you meet someone special, then move on and never see them again. It happens again, and again, and again.

And that is when the strange language and exotic buildings and incredible sights simply make you feel far from home. What good it is all if no one else sees it? Who else can ever possibly know what I felt, especially in those moments of wonder?

At such times I wonder why I am traveling. What am I trying to find? Myself? Or someone special ... to share these achingly beautiful moments?

Posted by onedumbtravelbum at 9:16 PM