After getting my fill of Red Square, I walked south across the Moscow River on my way to some very exciting Soviet nerd candy.

Halfway across the river, I came across two startling sights: first was the view back towards the Kremlin, which turns out to be the very finest in all the city. Absolutely amazing. And the second was also amazing in its own way: a beautiful woman in 3" red heels and skin-tight red dress getting picture after picture of her taken by her similarly clad friend. After awhile, they switched positions and more snapping away. This went on for the entire time it took for me to cross the bridge. If I've learned one thing, it's that some Russian women really, really love getting their picture taken. It was fantast- ... I mean, terrible to watch. Of course, it was a symptom of a patriarchal society that objectified women. But so did the Middle East and Latin America and of course most of the world including the US. What made it so striking here was how sexy the women were dressed, and of course their beauty. What was it really like to be Russian woman in this day and age? Were things any better than in the era of the Soviet Union? It seemed doubtful.

Pondering these deep thoughts, I made my way into a pretty district with many more domed churches of all different shapes and colors. There were pink churches, blue churches, green churches, oh blimey; peach churches, orange churches, all gold domed and shiny. (With apologies to Dr Seuss.)

Finally I made it to the weird park known as "Gorky". It was a mix of open green spaces, choreographed fountains, cheap-looking roller coasters, kitsch-selling booths, bums, beggars, and ordinary mothers with their kids. It was like a permanent state fair without the deep-fried oreos (so basically without the best part). But I wasn't here for any of this nonsense. I was here for the awesome and amazing Soviet Space shuttle, the Buran!!!

I couldn't wait to explore the sure-to-be-amazing museum documenting the fascinating history of the space vehicle and hopefully find fellow Russian space geeks! Oh that would be so great to laugh with them about that silly cold war space thing.

I rounded a corner, and ... there it was. Just sitting by itself on the pavement, like a van down by the river. It was as if the Soviets had said, "You vant Shuttle? No? You? No? No one vant crappy shuttle? OK, we dump by river." I couldn't believe it. How unceremonious! Poor Buran! 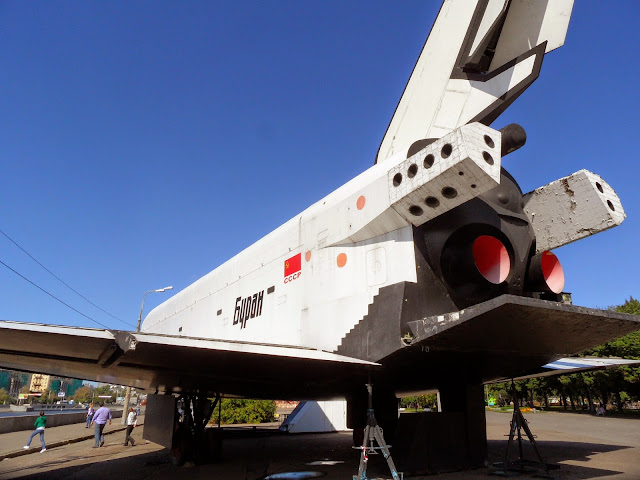 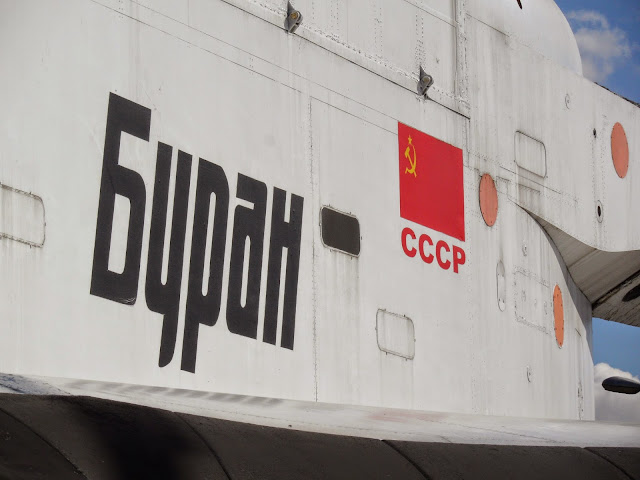 You can walk right up and even touch it, there are no guards. I circled around in awe, which shortly changed to pity. It was falling apart and no one cared. In the US, cities clamored for these orbiters, and I won't forget the famous moment when Endeavor was paraded around the streets of LA to a special home at the California Science Center. 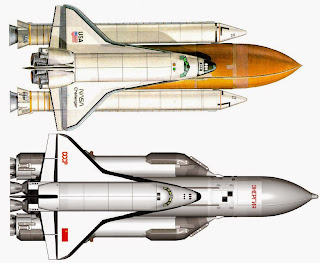 The Buran is a comically close copy of the US version, even down to the launch system with a main tank and two solid boosters. It was developed as a reaction to the American shuttle-- Russia's military was frightened by it's enormous payload capacity which was much larger than anything before. The Buran was intended solely for military purposes, as confirmed by Cosmonaut Oleg Kotov: "We had no civilian tasks for Buran and the military ones were no longer needed. It was originally designed as a military system for weapon delivery, maybe even nuclear weapons. The American shuttle also has military uses."

It was flown only once, successfully I might add, before the USSR dissolved and the need for it vanished. Sadly, the one that flew into space was crushed by the collapse of the hanger it was stored in at the Cosmodrome. I took a last glimpse at this relic of the cold war and shook my head.

It was time to get ready for a taste of the infamous Moscow nightlife and so I made my way back to the metro. Perhaps one of the greatest relics of the USSR is the glorious metro system. The trains themselves are rusting old buckets which rumble along like they might implode at any moment. But the metro stations are pure magic. Every station is different. One has red mosaics of Stalin leading busty women with guns, another has stained glass windows like a church, yet another looks like the inside of a gilded gold orchestra hall, complete with glass chandeliers. Taking a few hours just to troll around the subway is one of the best things to do in Moscow. There is nothing else like it in all the world.


Kremlins, churches, shuttles, blah blah blah. The best of Moscow was yet to come! Time to get my funky chicken loose and go clubbing...

Posted by onedumbtravelbum at 8:47 PM