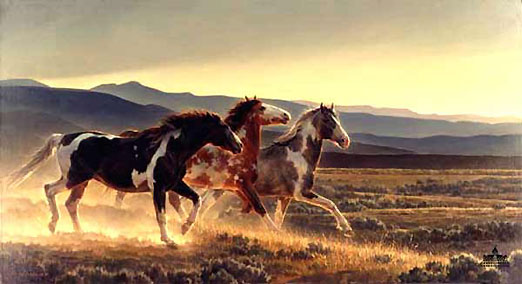 I awoke in the tent. Upon hearing the tent zipper, Rocky neighed a soft good morning. Today the horse truck would come and I would head back to civilization. I walked over to my horse, gave him a brush. He rubbed his nose on my body as he always did.

Over breakfast I contemplated this relationship. The horse has been a partner of man for 5000 years, placing it 3rd in our most important companions behind the dog (15,000 years) and cat (10,000 years). And now I had experienced it for a brief time. It would be hard to say goodbye to my new pal, who felt like an old pal. But change is the only thing permanent.

I decided I would have to have one last ride on Rocky here to the town center. I could leave off all my gear, Rocky would be unburdened like horse-riding was meant to be. So we saddled up and out the gate we went. I could tell instantly Rocky felt lighter on his feet.

We reached the road to town, and on the uphill side a large firm grassy bank flanked the road. This was perfect. We crossed and I urged Rocky forward to a trot. But this was not enough. It was our last ride, I wanted to open Rocky up and fly down the hill in full gallop! I urged him faster, and as soon as he began to run, I urged him even faster, with kicks and loud “Choooo!”’s. And that did it. Rocky broke open like a racecar bursting free from its governor. We flew down the hill at a speed that I had never experienced before on horseback. Eyes teared, hair flew, the ground was a blur. I yelled my barbaric “Yaaaawwp!” across the rooftops of the town. 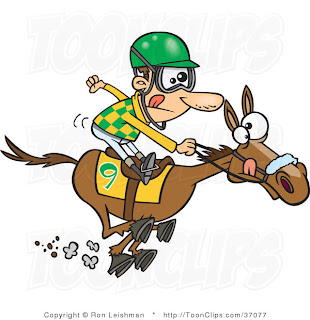 Now, during my horse-training crash-course, at some point it is very possible that I was told with wagging finger to never force a horse from a walk directly to a gallop. In my excitement to turn Rocky into a Porsche, it turns out this was exactly what I had just done. You see, horses are herd animals. When one horse quickly stops what they are doing and starts running, it is a danger signal. Quickly every other horse will also bolt. Unless the horse is trained for racing, you are supposed to do the following: 1) walk, wait a bit, 2) trot, wait a bit, 3) canter, wait a bit, and only when the horse is ready, and only for a short time, 4) gallop. And then you are supposed to do things in the reverse. This procedure keeps the horse calm and lets them realize that there is not, in fact, a pack of wolves nipping at their heels.

So, there I was, galloping down the hill at Warp 6, when suddenly I saw a girl I had met back in UB. What on earth was she doing here?! I pulled the brakes. Rocky stopped so quickly my eyes nearly popped out of their sockets. Huh. That was weird. I looked down and I could see that Rocky was absolutely terrified, huffing and sweating, eyes rolling about. Suddenly he started that crazy sideways trot, out of control.

“Hello! Nice to see you! Shit, um, goodbye!” I yelled to the girl as Rocky took me helplessly off into the nearby forest.

Once again, my attempt to impress atop my horse had gone about as well as Octomom’s marriage. Nice move Lone Ranger. After Rocky finally calmed down, I took my free hand and did what needed to be done. A nice long face-palm.

Unfortunately, my troubles were not finished yet. I walked Rocky the rest of the way into town, and after a few purchases at a store, began my return trip. Suddenly I heard the sound of laughing kids from behind. I turned and realized they were pointing at me. One of them mimicked de-pantsing his buddy, which set them all off in hysterics. I turned and look at my bottom. Over the course of the past week my thin travel pants had begun to seriously wear out, a fact I had apparently forgotten. My goodbye gallop had been the last straw. The seat had completely ripped off, exposing my underwear clad ass. I had walked into town, bought my items of convenience, and then  marched back out showing the entire local populace Nemo’s New Moon.

Asses whistling in the breeze together, Rocky and I began the long walk back to the hotel.

The truck to pick up Rocky could not come soon enough.

Posted by onedumbtravelbum at 8:15 PM