The Rush of Combat
I stared up nervously at the huge tree trunks stomping by.  The bottom of each pair of trees was adorned with garishly painted leather boots, the toes curling up like a gnome.  Where the trunks merged a bright blue, red, or sometimes pink Mongolian speedo was camped out, smuggling berries.  Above: thick muscles, no neck, and the fat mean-looking head of a fighter.
These were the Mongol wrestlers of Nadaam.  And one of these oxen would be my opponent.  In Mongolian wrestling, there are no weight classes and some of these guys were pushing 250 pounds.  I slapped my forehead.
The parade of beef in speedos wearing spiky hats was only part of the opening ceremony for Nadaam, the biggest festival in Mongolia.  I had ridden 5 days on horseback to reach the town of Renchilkhumbe in time for this event.  I could have watched the massive one in UB held in a huge stadium, but the thought of being bussed in, frisked by security, and standing nose to elbow in a mob hundreds of feet from the action didn’t sound like fun.
Instead, I was in this remote town, part of a small colorful crowd of locals doing their own version of Nadaam.  When the wrestlers stomped by within a foot of my camera, I knew I had made the right decision.  A parade of treasured white horses circled the little infield, the lead rider holding up my new favorite banner, the unique flag of Mongolia.
And then, the “music” started.  Mongolians, like the Chinese, love the sound of a woman screeching like a starved feral cat.  This of course is put to Soviet-style military anthems, which seem to be recorded on 8-tracks from 1964.  The static-filled screeching was abruptly halted in mid-song for a dance number.  Little kids rushed out in an odd-lots assortment of white shirts and red shorts.  Then, incredibly, Wonder Girls came on, with their one-hit wonder "Nobody".  The youngest kids in front tried their best to imitate a 2nd-grade play where everyone just bumbles around on stage randomly.  It was cute and hilarious, especially with the Wonder Girls singing about how there was Nobody but You.


Nobody but you
After some more “singing” from a lady dressed all in fancy white, who was apparently representing the reindeer people, the flag was hoisted.  Comically, it only made it halfway up the pole.  Apparently the rope didn’t reach the top, but no one seemed to mind.  The flag at half-mast was a perfect symbol for the chaotic and colorful feel of this small-town party.
The first event was Round 1 of the wrestling so I had no time to contemplate my stupidity.  The event begins with the biggest oxen heading out into the ring.  There is an awesome amount of ritual leading up to the actual match, which is almost anticlimactic in comparison.  First, the men run out to the referees / coaches / guardians.  These refs are dressed in long ceremonial deels of either red or blue.  The combatants walk back and forth three times, holding onto the ref, and then they bow down as the ref removes their spikey hat.  Next, the men all run up to an ovoo-thing covered in flags.  This is where the good part begins.  The men slap their thighs, then their ass, and their thighs once again to show how macho they are.  But immediately after, they run around like chickens flapping their arms!  It is supposed to be the graceful Eagle dance, but when you see a 240 pound man in pink underwear running around flapping his arms Eagle isn’t the first thing that comes to mind.
Lastly, they return to the ref.  And then they just start wrestling.  There isn’t any signal or anything, they just grab each other and go.  It’s all very informal. 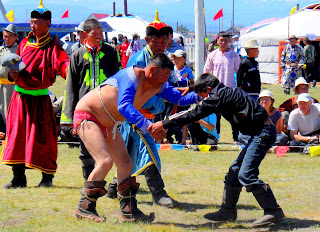