As I boarded the Star Ferry, the sun began to set and the wonders of Hong Kong began to light up the horizon in all directions.  For the cheap price of HKD$2.50 (30 cents), an incredible bargain in this most expensive of cities, you get the ride of a lifetime.  The Star Ferry leaves from TST harbor (Tsim Sha Tsui) and in a short 20 minutes crosses over to Hong Kong proper.  The 360 view of towering blinking skyscrapers reflected in the water, backed by mountain peaks is one-of-a-kind. 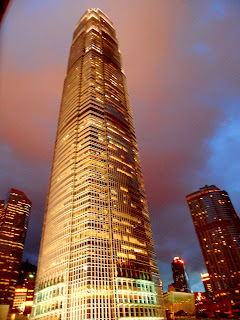 Hong Kong is perhaps one of the prettiest cities I’ve ever visited.  The British demanded and received a small strip of land in this region after watching the Portuguese amass a fortune in neighboring Macau, and Hong Kong quickly took off and became the premier trading port in all of East Asia.  There was only one problem: the little strip of land was ringed by mountains and water, leaving precious little real estate to build upon.  The solution: go up, young man.  Hong Kong has thus become a truly vertical city, from every patch of flat land near the water sprouts 60, 70, and even 100-storey skyscrapers.  The population density in some neighborhoods is the highest in the world (53,000 people per square km in Kwun Tong!!)  It looks like a kid’s shiny version of some far-off city of the future.  And at night, when the sun sets and the lights turn on, it is a spectacle.
At night, the bars are a United Nations of immigrants and ex-pats from around the world, serving every type of food and drink you could want.  Instead of sidewalks, elevated skyways carry pedestrians around decked out in a Buck Rogers version of futuristic brushed aluminum and soft lighting.  The subway is excellent and air-conditioned, the city feels clean and safe despite the hordes of Malay prostitutes in certain areas.  But perhaps one of the most surprising aspects of Hong Kong is that only a short subway-to-bus ride away, peaceful green mountains await hikers, and relatively untouristed fishing villages and beaches await surfers and sunbathers.  Even kiteboarding has established a tentative foot-hold, although I was devastated to have just missed great wind conditions left by a passing typhoon.
There is only thing missing, really.  And that is that sugary white stuff we call pow.
Posted by onedumbtravelbum at 7:51 AM