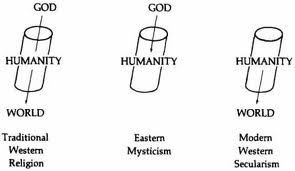 Usually it happens by pure chance.  I'll be reading something about Eastern religion, and I'll get this odd sense of deja vu.  Where did I read this before?  And more often than not, I'll remember that what sparked that feeling was something from the West.  Whether it be discovering the spiritual aspect of nature, or finding happiness through acts of selflessness, these not-so-random connections prove to me beyond doubt that there are universal human values, and they pop up over and over again throughout the world.  The Truth simply cannot be denied.

Kant glimpsed these truths.  Although he was devout Christian and a total product of western thought, he was an accidental eastern mystic at heart.  In his Critique of Judgement, Kant gets to his most delicious topic: the study of the Sublime.  The Sublime is the

" ... aesthetic appeal of objects that are too massive or dynamic to be fully comprehensible to our faculties: the unnumerable stars on a very dark night or the close-up view of the Niagara Falls.

Our enjoyment in these cases ... is based on our recognition that we must attempt to envision the infinite, even though our imaginations cannot.  We gain a sense of dignity as human beings by recognizing the power and scope of our imagination, while at the same time experiencing our relative insignificance in the natural scheme of things.  Thus, we are "overwhelmed" by a magnificent seascape of the infinite we cannot comprehend."

In my life to that point I had never read something that spoke so well to that wonderful transcendent feeling I've always had during a beautiful sunset or other natural spectacle.  Yet here was Kant, across 200 years of time, singing that emotion in my ears as plainly as if he was across from me at the table.

Beauty to Kant is anything that gives us this notion of the Sublime.  He argues that beauty is the ultimate symbol of morality, which implies that immorality destroys beauty.  (I like to think of him as the first environmentalist.)  Beauty encourages us to believe that we are a part of nature and its grand design.  It shows us that there is an order to things that we cannot break down into a scientific recipe.  And thus, the harmony, beauty, and order of nature draws our thoughts to a larger Ultimate Reality.

It was at this point that I realized I had found my philosopher.  Here he was, taking my jumbled random thoughts on life I had amassed and tossed into the various bins of my brain, and he was taking them out, dusting them off and putting them neatly in order.  It was if this man had read my dreams and could tell me their meaning.

His vision of morality and cosmic harmony unites and synthesizes all that I loved from Siddartha, Lao-tzu, Chu Hsi, the Gnostics, Aquinas, and Spinoza.  They are indeed sublime.
Posted by onedumbtravelbum at 10:04 PM