The authors spend some ink on 20th century philosophy, but mostly the last 100 years are known as the era of the World Wars, the Depression, and the build-up to nuclear armageddon.  The endless supply of new resources from colonialism and Empire had been exhausted, and in tragic irony replaced with the new threat of overpopulation.  The Enlightenment had been machine-gunned and then bombed to dust, the promise of the bright humanist future lay in tatters.

The authors get into Freud and his theories of repression, but to be honest psychoanalysis is really a whole separate subject.  The book culminates with Jean-Paul Sartre (1905-1980), the final Existentialist.  (The authors say they don't want to write about anyone still alive, so That's All, Folks.  Current philosophers you'll have to find on your own.)  Sartre adds to the ideas of Kierkegaard that you should never let yourself be defined by your "role" in life.  You must always strive to transcend these roles and fulfill your true unbounded human potential.

He talks about that "angst" we all feel, that we will never know if we are finished with our work.  "We are always trying to define ourselves but we are always an 'open question,' a self not yet made."  I think about that angst one feels as a senior in high school, then again as one graduates college.  And on it goes.  We constantly go down forks in the road that make us who we are, and we can never go back.

That angst we feel though is not a reason to despair, according to Satre.  It is a reason to celebrate, because it means you have freedom to choose your own path, and the self-awareness to know where you have been.  These freedoms are a luxury, be glad for them, and always remember: it is up to us to make the most of our current situation. 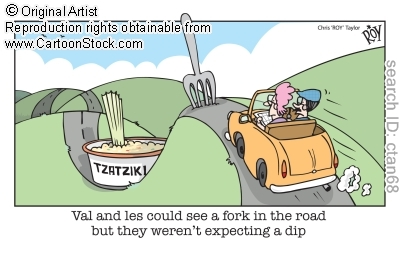 Posted by onedumbtravelbum at 3:16 AM