Philosophy Part XIII: Who are you? No, I mean: really, who are you?

When people reach the age of 11 or 12, a funny thing tends to happen.  One day, unexpectedly, a thunderbolt strikes.  Perhaps they are staring in the embers of a dying fire late at night (how it happened to me), or maybe they are studying themselves in front of the mirror.  But a strange thought enters the brain, it grows and fills you up with an odd sensation until you are forced to confront it.  You suddenly realize that you are You.  Everything that you experience, all of your sensations, the entire world even, is only real through your perception of them.  It is the birth of the Ego.  I remember clearly the moment it happened to me.  The hair stood up on my neck and a chill went down my body, as I looked at my hands and realized that I was something very strange.  I wasn't just a set of activities, emotions, and desires.  I was something more.

Perhaps everything outside of my mind was a dream, perhaps I was all that was real?  (When I read Descartes, it was cool recognizing that he was talking about exactly this experience.)  My head swam a bit, I felt reality slip.  Over the next few days, I pondered my existence.  The chill returned each time.  But gradually, the feeling faded as the daily hum of life broke my meditation.  And today, I find that it is very difficult to recapture that feeling.  I never think about Who I Am anymore.  Life keeps me way too busy.  So it was with great anticipation and an odd sense of deja vu that I began to read Kant's ideas about the Self.

I suppose any discussion of the "Self" must start with Freud.  Although today some of his odder theories, such as his fascination with castration, the anus, and mother-loving, are mostly discarded, his basic ideas about how the mind works revolutionized how we perceive ourselves.  The concept of the id, ego, and super-ego are now required reading for any university student.  But as interesting as all this is, its all pretty ivory tower.  None of it really answers that burning question I had as a little kid, "Who Am I?"

A century before Freud, Kant had his own 3 conceptions of the Self, and as I read them I found it pretty funny that Freud had obviously stolen some of Kant's material.  But more importantly, I found myself a little startled to see how closely Kant's theories paralleled Hindu and Buddhist thought (which I will talk about more later in my post on the fascinating Bhagavad Gita).  There is some truth to each of these conceptions. 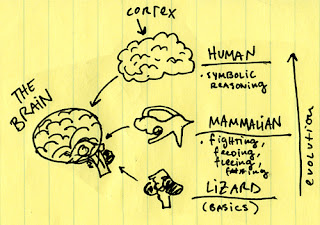 According to Kant, our first and most fundamental aspect is the transcendental ego, which is the instinctual set of activities we perform everyday.  It is inherent in everything we do but never fully experienced.  I liken this to our "lizard brain."  It is what Freud later called the Id.  It is the amygdala, it performs the beating of the heart, our respiration, and translates light in our retinas into something mysterious called an "image" in our minds.  To respond to my question when I was child, it would be the view that we are indeed just a sack of fluid that happens to think.  Buddhists might call this our true nature in that it is our impermanent body, constantly changing as our cells die and get replaced.  It is what we came from and what we will end up as, it is our connection to nature and each other and understanding this concept is the key to enlightenment.

In Hindu thought, this could be also be thought of as the rajas guna.  The rajas guna is the source of our passions, like the Id it constantly seeks instant gratification.  It acts to hide our true nature from ourselves.  Freud compared the Id to a wild stallion that is difficult to rein in.

It is easy to say "Yes that is fine but I just want to know about my conscious self, my "soul."  But to neglect what we are made of, our base impulses which often cause us to make irrational decisions and ignore sound judgement is to deny a vital part of our Self.  As much as we like to think we have dominion over the "animals," sometimes its good to remember we are still one of them.

Kant believed our second aspect is the empirical self.  The empirical self is what most people recognize in the mirror.  It has features, friends, a history, culture, and context.  I like to think of this as the Facebook Self.  (Freud later expanded this idea into the Ego.)  Posting comments and pictures on Facebook validates and justifies our existence, much like singing on a stage or writing a novel.  This could also be thought of as a set of clothes.  The clothes hide our true appearance from others, and if we wear the clothes long enough we forget what we really look like too!  In Freudian thought, the Ego is the referee between our wild passions and our moral conscience, which are constantly fighting.  The Ego knows we can't go nuts all the time, but we can't fret about being perfect all the time either.  Freud, ever dramatic, visualizes the Ego as a man hanging on for dear life as he tries to ride the wild stallion of the Id.  It is the part of our Self that lives in the Real World and has to be practical.

In the Western world this is considered our most important aspect.  Westerners are a very practical bunch.  But I find it very interesting that in Eastern thought this part of ourselves, like the rajas guna, is also one of the bad guys.  In fact, the Ego, our Empirical Self, is really just part of the world of maya or illusion.  Like our passions, the experiential world and its rules distracts the spiritual seeker from their true nature and the right path.  For Hindus this is the realm of selfish motives, fueled by desire for material goods.

Finally Kant's awkwardly named self-in-itself is our consciousness.  It is our higher Ego.  It deliberates, makes rational decisions, and gives us morality.  (Freud and Kant kind of overlap on these ideas.  Freud lumped the decision-making part into the Ego and gave morality its own category: the Superego.)  You could call our higher thinking the part that makes us unique among the animals.  Neurologists might call it the pre-frontal cortex.  In Hindu thought this is the realm of the highest guna called sattva.  Our self-in-itself, our sattva nature, has the ability to be what Stephen Covey would call proactive.  This is our greatest gift: our ability to ignore our animal instinct and our often irrational emotional response to the craziness the world throws at us.  Instead we can detach ourselves from that emotion and step back and examine it.  Only then can we can proceed with what is truly best for us.

Buddhists might call the self-in-itself the Atman, which is for them is not a good thing.  They have decided that we not have a true self, our ego is simply an illusion.  Our bodies are simply part of the chain of life, composed of molecules and atoms that just happen to think.  Hindus on the other hand believe that recognizing the true self, the Atman hidden behind all the emotion and layers of clothes we hide ourselves in, is the true path to enlightenment.  Our intrinsic Self is a spark from the creater, Brahma, which lives inside everyone.

But what does all this mumbo-jumbo mean?  Did I find an answer to that bizarre sensation I felt as a little kid?  I suppose I will say this: unlike Descartes, I can't believe its all just a dream out there.  The world is plenty real enough.  And unfortunately, I am certainly not my own God.  That feeling that I am somehow different from everyone else, that I am special, that recognition of my Self apart from everyone and everything that makes me feel I am the only thing that is important in the universe ... its all just a trick my mind plays on me.  Because everyone else, if they think about it hard enough, if they find someplace very quiet, or stay up late and stare deeply into that campfire, will ultimately experience the same thing.  Thus, I can't be the only one that feels this way or thinks these thoughts.  I am not all that special or unique after all.  I am just another dude.

Ultimately it comes down to a choice.  We either believe that our consciousness, our ability to think rationally, is the end of the discussion.  That is our highest Self and it is a great gift, but that's all there is to it.  When we die, that Self vanishes forever.  There is nothing more.  Or, you can go a more mystical route.  And you can believe that beyond the Self, there is something else.  There is the Soul or Atman.  Brahman, the divine spark, that piece of God that lives inside us and makes us capable of doing things that no other form of known life can do.  Something eternal, that connects us back to nature.

The more I think about it, the more I think that perhaps our highest nature ends up being the same thing as our most basic nature.  In other words, if our true nature, the divine spark, is higher than the Ego and part of something bigger, part of the natural world and the universe, isn't that actually the same view as thinking of ourselves as just a set of molecules, bits of the natural world that happened to come together, just so, to make us "us"?

Maybe the Buddhists and Hindus are saying the same thing after all.

But mostly I just want to check Facebook right now and make sure I still exist.
Posted by onedumbtravelbum at 9:00 PM