Blood of the Snake

The old lady nodded and reached carelessly into a large hemp sack.  Out came a writhing, coiling, 4-foot serpent.  Oh shit.  What the hell had I gotten myself into this time?

Earlier that day, sitting around nursing hang-overs, I was ordering my breakfast from Monkey Jane's.  I love looking at Chinese menus, often the translations into Ching-lish are so funny they require a picture.  But this time, I was truly surprised.  Below the noodles was a separate red box that read: 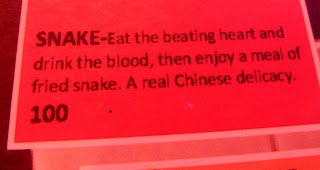 This must be a joke.  I asked the bartender/waitress/only employee.  She nodded her head.
"Oh yes, no problem.  You want have snake blood?"

"No way dude!!!  We are witnesses, now you have to do it!" said another backpacker watching this transaction.  Two other girls from the States were there and nodded.

Whatever, dinner was like, so far from now.  I had to go back to bed and sleep anyway.

A short nap later and I found myself upstairs, surrounded by a small disbelieving crowd, with an old lady handing me a snake to touch.  My palms started sweating.  I grabbed the snake and it instantly reached its head up at me.... but instead of biting it coiled its head around my arm and then went up and around my neck.  I relaxed, and realized the snake just wanted a better hang-out to watch all the action.  Poor snake, it didn't realize that it would soon be the action.

After we were done playing, the lady grabbed the snake and walked over to a glass cup in a plastic bowl.  Before I could even get out my camera, she took out a pair of small shears and put them over the snake's neck.  She held the tail up high with one hand, and with the other applied pressure to the shears.  The snake suddenly went tense, and started wriggling as hard as it could.  But the old lady was strong, she held onto the snake fiercely and finished the job with one quick stroke.  I heard that metallic sound scissors make when they close, and then plop, the snake's head fell to the bowel.  At that moment, I felt bad for the little guy.

The body continued to writhe a bit as the lady moved the bleeding neck over the glass.  The blood squirted out, congealing into the cup.  A surprising amount began to fill up the glass as the snake's heart, still beating, continued to pump.

Finally, she handed me the glass.  I grabbed it with a mix of horror and fascination.  What if the blood had parasites?  What if, by doing this act, snakes would decide to gang up on me and take revenge in my sleep?  What if it tasted like V8 juice (that would be awesome)?  At this point the crowd was chanting, "Drink, drink, drink!"  I had no choice.  I swallowed, but there was way too much.  I had to swallow again.


Man vs Food: China Edition
Blood has little initial taste.  It is the aftertaste that, quite literally, sticks to your throat.  The blood was already congealing as it went down, coating itself on my tongue and throat and esophagus.  The familiar taste of iron and salt was mixed with something else, something darker and, well, I can only describe it as ... snake-ier.  It was like tasting the blood from a busted lip or broken nose, but it also wasn't.  It had a repitilian taste I suppose, if you can imagine what that would be like.

But apparently I hadn't fully finished the glass, and the crowd noticed.  At the bottom was a dark red residue, almost turning solid.  "Drink, drink, drink!"  Dammit.  I had to finish the dregs.  This time it really stuck to my throat.

After drowning it with as much pijou as I could, I watched as the lady took the body and disappeared.  Huh?!  I thought there was something about eating a beating heart, but I guess not.  I felt a little cheated, but about 30 minutes later, up arrived a snake feast.  A huge steaming plate of snake meat was mixed with onions and peppers and ginseng and tasted delicious.  On the right sat a huge bowl of snake soup, made from the bones.
And yes, it tasted like chicken.
Posted by onedumbtravelbum at 6:00 AM