Malapasqua is the Philippine antidote to the excess of Boracay.  No masseuses mewed out to me as I strolled the beach, no disco blared in the afternoon, and most refreshing of all I wasn't assaulted from a bush, chased down, and forced to watch a lady-boy drop his skirt a single time.

Bounty Beach was once one of the most beautiful beaches in the world: a natural wonder of wide curving sand flowing out to a shallow green sea.  As is the case with all the prettiest beaches, Bounty lies on the leeward side and so the water is glassy and inviting.  But a series of typhoons clawed away a good chunk of it.  Today the beach is still beautiful but its not quite as stunning as you see on the old postcards.

The once slumbering island has 24-hour electricity, Wi-Fi, and unfortunately there are now little kids hawking shells, a sad Boracay import.  But, for the most part, it is soothingly quiet.  Aside from the throngs who come for the diving, there really aren't that many tourists.  And the diving is excellent.   The water is warm, visibility can be 30m.  Monad shoal is famous for the mesmerizing thresher shark.  This odd creature swims lazily along, its large eyes and bullet-shaped snout reminiscent of a stoned Mako.  But what makes it special is its incredibly elongated tail, which it gracefully swishes back and forth much like a contented cat.  The tail is as long again as its body, and its difficult to fully appreciate until it swims close by, the tip of the tail flopping behind like a streamer. 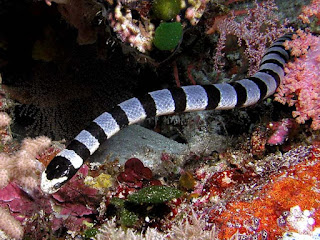 The lucky diver might also see Devil Rays and mantas, and hammerheads patrol the Khimud Shoal not far beyond.  An hour in the other direction from Malapasqua lies Gato Island, where you can swim through a 30m cave and watch the ridiculously venomous black and white banded sea-snakes shyly guard their hatchery. 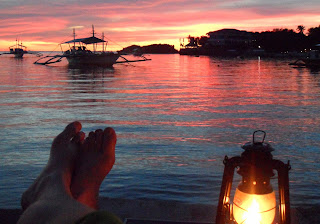 Other than diving, there's really not much to do which is why it makes an ideal place to be a travel hermit and chillax.  I spent my days reading, blogging, and watching golden fiery sunsets from the floating bar just a short swim from my bungalow.  At night, both the North Star and Southern Cross are visible at the same time, the familiar constellations of the Big Dipper and Orion are low in the sky, pushed down by a whole new crop of twinkling Southern mysteries.

I thought of my old co-workers, just waking up for another day at the office, half a world away.  And then the image of that T-shirt in Boracay: "Quit your job.  Buy a Ticket.  Fall in Love.  Never Return."  That last part was sounding nicer every day.  I have to admit, I am tempted ... 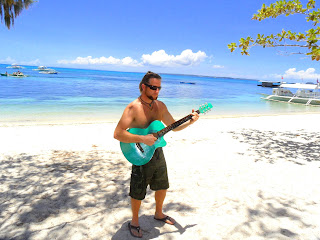 Posted by onedumbtravelbum at 9:31 AM