If you like philosophy, you have to take a minute to appreciate the unique country that is the United States.  It was the first true democracy in the world.  And as an American, it became very clear from the book that I owe a huge debt to a small handful of British and French philosophers.  Without them, America might not exist, or at least might be a very different place.

John Locke and David Hume had perhaps the greatest impact on the ideas that make up our country.  These "British Empiricists", together with the "Continental Rationalists" like Spinoza and Leibniz, managed to turn Europe on its head.  They attacked the decadent monarchies as backwards and corrupt; they decried the antiquated social and economic structures as impeding progress and encouraging intolerance.  Most importantly of all, they argued for the universal human capacity of reason, which was their weapon against the endless tribal fighting that had killed so many millions and still divided Europe.  "Modern philosophy" was a defense of humanism and tolerance, a plea for conversation instead of deadly massacre.  Irrationality was their true target.

Hume was a self-styled pagan and a naturalist (perhaps why I like him immediately!)  He said that "if reason cannot justify the belief in God and the religious prejudices that go along with it, then so much worse for religion."  "Commit them to the flames!" he famously said of the tomes of theological metaphysics developed over the past thousand years.  Now I'm not one for burning books of any kind, but I definitely felt a kinship with this free-thinking Briton who was disgusted with the layer upon layer of soggy doctrine that the church had accumulated over the centuries.  The original simple teachings of that carpenter, a Jew or perhaps an Arab, that we should love one another, had been buried under mountains of sediment.

Hume believed that all knowledge should come from experience or logical deduction.  Religion cannot be proven by either method.  But importantly, he did believe that where religion failed, nature nevertheless provided us with the good sense to make our way in the world.  Our human natures provide us with the moral compass to behave reasonably towards one another.  This idea that humans have a "built-in" sense of justice, altruism, and good behavior is supported by both evidence and intuition.

Locke was Hume's contemporary.  Locke's ideas were so revolutionary at the time that he made nations tremble, and yet today they seem so ingrained in us that we don't even question them.  To me, that is the ultimate testament and power of a great idea.  He proclaimed that humans have something called "inalienable" rights.  We are born with certain liberties like the right to own property, freedom of expression and religion.  These are rights which can never be granted by some king or ruler, they are "natural."  Along with Rousseau and later Kant, these Enlightenment philosophers stated that the very purpose of government was to "serve the citizens"!  Rule was not granted by divine right or by superior strength, rather it was given by the will of those governed. This was the birth of the concept of the "Social Contract"--that a government existed only within the framework of a "contract" to the society it oversees. 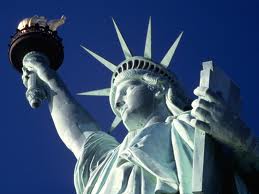 Of course, these radicals were still locked under the thumb of the old Europe and its oligarchies; their ideas caged birds.  But the Americas (after the extermination of the natives) were a blank slate.  Luminaries like Thomas Jefferson carried the torch of humanism across the ocean.  They had the opportunity to start fresh, to unleash a new age.  The modern sages sparked revolution first in the New World and then in the Old.  But the one in America is the one that still stands today as it was first conceived: a symbol of humanism, personified by the Statue of Liberty.  And it could not be a better symbol, for much like Lady Liberty was a gift from France, so too were many of the greatest ideas of our American government gifts from the Europe.

Now its hard not to get a stir of patriotism when one reads something like this, so with my new perspective I took the time to google our Declaration of Independence.  As I read the words, it gave me pause as I thought of the Arab Spring, where people at this very moment are suffering and dying for their own inalienable rights, their own just government, their own pursuit of happiness.

"We hold these truths to be self-evident, that all men are created equal, that they are endowed by their Creator with certain unalienable rights, that among these are life, liberty and the pursuit of happiness. That to secure these rights, Governments are instituted among Men, deriving their just powers from the consent of the governed. That whenever any Form of Government becomes destructive of these ends, it is the Right of the People to alter or to abolish it, and to institute new Government, laying its foundation on such principles and organizing its powers in such form, as to them shall seem most likely to effect their Safety and Happiness. Prudence, indeed, will dictate that Governments long established should not be changed for light and transient causes; and accordingly all experience hath shewn that mankind are more disposed to suffer, while evils are sufferable than to right themselves by abolishing the forms to which they are accustomed. But when a long train of abuses and usurpations, pursuing invariably the same Object evinces a design to reduce them under absolute Despotism, it is their right, it is their duty, to throw off such Government, and to provide new Guards for their future security."

What hope and naked optimism it symbolizes for our human race!  It is truly a masterpiece of the Enlightenment, the first genuine instance of a Social Contract.  In a tragic twist of irony, David Hume passed away that same year: 1776.

When the French radical Antoine lay in prison, awaiting death by execution during the French revolution, he wrote these words:

"How consoling for the philosopher who laments the errors, the crimes, the injustices which still pollute the Earth and of which he is often the victim, is this view of the human race, emancipated from its shackles, released from the empire of fate and from that of the enemies of its progress, advancing with a firm and sure step along the path of truth, virtue, and happiness."

I imagined Antoine laying in his cell facing death, somehow still having faith in us.  Perhaps it is a good thing he was not around to witness the World Wars, genocides, nuclear bombings, and terrorism.  The Age of the Enlightenment was forever destroyed in the pointless trench warfare of WWI, where about millions of terrified soldiers were annihiliated by the new invention of the machine gun.  Somehow, despite it all, I still share Antoine's hope.  Someone (for once Google failed me) once said that humans are good.  It is humanity that is evil.  What is meant by this of course is that the average citizen is a decent human being, but when they mass as a populace they relinquish tremendous authority to a few individuals at the top, who inevitably become corrupted by this power.

How many socialist revolutionaries who promised wealth and equality to the poor came to power only to stagnate into corrupt dictators?  The list is too long, from Lenin to Castro to Mubarak.  Yet today, the power of the internet and social media has allowed individuals greater access and opportunity then ever before to break through censorship and bureaucracy.  It is more difficult than ever for governments to deceive and bully their own people.  Thus perhaps, just maybe, we are entering a new post-modern age.  An age that might make Antoine smile.
Posted by onedumbtravelbum at 2:47 AM