Morality part IV: Rob the Rich to Feed the Poor

Was Robin Hood morally correct?  Yes, I didn't think so either.  Men in tights is just wrong.

James Sterba's book, Morality in Practice, is a doozy.  He tackles all the big questions of his time (1993), ranging from the distribution of wealth to charity to abortion to gays to hamster grooming.  For the most part its a series of essays written by people defending different views on these subjects, and to be honest I found almost all of them pompous idiots.  Each one would have a good nugget of an idea surrounded by ten pages of crap.  I know in the university system professors are paid by the amount they publish, and the results are overblown essays like these.

So its a chore to sift through it all, but I duly waded in on a few topics that I care about.  I started with the distribution of wealth.  The big fight is over Robin Hood's ethics: taxing (or robbing) the rich to provide the poor with a decent level of living.  It seems obvious today to most people that taking care of the most vulnerable citizens is a morally good thing to do.  Its supported by religious tradition and meshes with all the big moral theories like Utilitarianism, Kantian-ism, and Social Contract proponents.  Its even an Aristotelian Virtue.  Its something that any modern society should have, and our government duly taxes us and provides things like social security.  Some argue that we should increase the tax on all prosperous countries until everyone in the world have their basic needs met.  This Radical Egalitarianism pretty much takes a few happy pills before people say it might work in the real world.

The argument for the tax varies, from John Rawls' Veil of Ignorance to Utilitarian ideas of what does the most people the most good.  The idea to share all the world's wealth in order to provide the basic needs of everyone sounds like a good ideal for us to strive for one day; its the utopia of Star Trek, where there is unlimited energy and food.  But in a world that runs on high-priced oil and where 40% of the population doesn't have enough to eat, at the moment utopia is better suited to fiction writers. 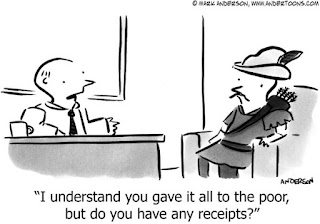 More interesting was the article against the tax.  Of course the rich hate it and have developed a strong argument called Libertarianism, which is pretty much code in the US for Republican.  My Dad wasn't rich but was still a devout conservative, and I have to admit that I find the basics of the theory very appealing.  The Libertarian Manifesto by John Hospers has two principle ideas: 1) Hospers relies heavily on John Locke, one of the pioneers of human rights, with the idea that anytime you create value with your own labor, you have the right to own the result.  This is the core idea of property.  2) If you own something, no one, not even the state, has the right to take it from you for any reason.  This is the equivalent of burglary.  Robin Hood was a thief, that's all there is to it.  Thus, the tax is unjust.

On the surface it sounds good, especially to what Sarah Palin likes to call red-blooded Americans.  (Apparently I have green blood or something.)  Who can argue with the idea of property rights and getting to keep what you earn?  But there are several errors in this approach.  The first occurs when Hospers states that the only purpose of government is to enforce individual rights.  Hard-core libertarians think that we shouldn't have any regulation of corporations whatsoever.  The problem is that corporations are motivated only by greed, not the public welfare.  In China where regulation is weak, toys are painted with lead and baby formula is made with melamime.  The government is needed as a counterweight to corporate interests. 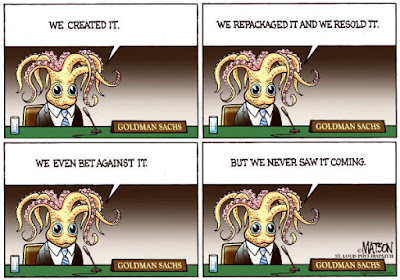 The recent collapse of the financial sector is instructive.  Libertarians cry, "We shouldn't have bailed them out!  They need to be punished.  Capitalism is self-correcting, by bailing them out we only reinforce bad behavior!"  This is short-sighted on two fronts.  First, the whole reason that the banking institutions were able to leverage their assets at 30 to 1 on bad mortgages was the repeal of Glass-Steagall, aka government regulation!  Congress took the cop off the beat and look what happened, the corporations ran amok.  Libertarians might argue, 'So what?  If we hadn't bailed them out, they would have learned their lesson.'  The problem is that the Libertarians are ignoring the fact that, in the process of 'teaching them a lesson,' millions of people lost their livelihoods and their homes by deceptive lending practices driven by greed.  Its not enough to let capitalism "self-correct."  Just like the FDA prevents us getting poisoned with lead, the federal agencies overseeing the economy have the duty to prevent innocent people from getting harmed by corporate interests.  This is just one of many examples of why Libertarians are wrong on calling for a toothless government.

The other crucial error of Libertarianism is that it has a built-in erroneous assumption.  They assume that everyone has an equal opportunity to build wealth.  But this is simply not the case.  A poor black man in the ghetto probably can't afford to go to a college, and a person with genetic mental illness might never be able to hold down a decent job.  Both of these people are simply victims of being born into an unlucky situation.  What is the morally correct thing to do in this case?  For modern societies, it seems that the correct solution is to put into place programs that can help assist disadvantaged people with getting a more equal chance at earning a reasonable living.  Thus, taxes can provide education programs in poor communities and provide people with mental illness access to doctors and medicines.

Posted by onedumbtravelbum at 1:31 AM