There is a line in philosophy that goes: "The whole of philosophy after Plato and Aristotle is but a footnote."  But after reading the book, its clear that the opposite is true.  The Ancients simply parted the fog from our eyes, but its those that walked after them that are the most relevant to me today.  Here is a short list of the best:
1) Spinoza
2) Kant
3) Kierkgaard
4) Nietzsche
5) Thoreau and Emerson
But that's getting ahead of ourselves.  The authors make some great comments on organized religion that I just can't pass up.

To me, organized religion is a necessary thing for humans, its like water for a fish.  Freud got some of it right when he described it as our mind's defense against the "crushingly superior force of nature."  For me, its more subtle.  To rephrase my earlier statement, the quest for knowledge is the curse and blessing of the human brain.  We are the only animals, as far as we know, that have sufficient brain power to contemplate the idea of infinity.  We can ask questions that are unanswerable such as "Why are we Here?"  But the mind goes crazy without that answer.  It NEEDS that answer.  And thus speculation becomes myth becomes religion.

I'll let others, like the "militant atheists" Dawkins and Hitchens and their religious antimatter like this guy, argue as to the good or evil of organized religion.  Personally I take the middle road and its refreshing to see there is new breed of moderate voices out there, who recognize, that much like everything in life, its a mixed bag.  There are wonderful things like home-building, drug addiction therapy, and charity, and terrible things like genocide associated with it.  But I also recognize that it will never go away as long as we have our finite brains looking up at an infinite universe.  And the harder either side pushes, the more extreme the opponent gets until we have terrorism and Quran burning.  So its best to learn to live with it.

But I digress.... the authors bring up something so incredibly important about organized religion that its worth considering.

"What does it mean that human beings were created in God's own image? And, if this is true, why would God seem to favour some human beings and not others?"  This idea is the key to understanding the worst aspect of religion: using it for justification for violence against "others."  Religious-based violence was and continues to be based on the idea of group favoritism.  In other words, even though God created all of mankind, and created them all in his image, for some arbitrary reason he only picked a tiny handful to bring to heaven, and all the rest, the vast majority of people on Earth, are mere pawns in a twisted game, to be cast aside and tossed into the flames.  Why would He do something so hypocritical and downright evil?  I realize this is an argument used by missionaries to justify their work, but what about all the millions of people who had gone before, who simply lived their lives and went about their business?  The idea that all others but your group are doomed strikes me as the height of tribal prejudice and racism, justified and reinforced by organized religion.

The author continues: "For example, Abraham, whom He favoured alone among the population of an already well-populated and civilized area, or Isaac, the son of Abraham, whom God chose over Ishmael according to the Hebrew Bible, as Abraham's successor.  The Arab population within Islam traces its ancestory to Ishmael, whom the Qu'ran presents as the favored son of Abraham.  The divergence of these accounts has helped to precipitate one of the most hate-filled conflicts in the world, with the two antagonistic neighbors each claiming to be the "chosen" people, with special priority and special protection from "their" God." 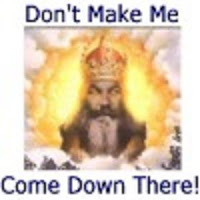 Another nugget I found interesting was this: "Hebrew's all-powerful , protecting God was extremely unpredictable...whimsical, and easily enraged."  I think back to the biblical story of Solomon offering to cut a poor womans' baby in half with a sword, or when God slaughtered approximately 100,000 children and 68,000 helpless woman for idolatry committed not by them, but by the men in their families.  There are many many other examples, too numerous to discuss here.  "On the one hand, the Jews were protected by their mighty God.  On the other hand, however, this protection was by no means wholly dependable... When disaster struck--as it often did--the Jews did not doubt their belief but rather blamed themselves... The alternative explanation, that they were being abandoned by God, was unthinkable to Hebrews.  Guilt was for more preferable..."

This example serves as a great analogy to life in general.  When faced with a terrible truth that might cause a person to have to change their entire way of lfe, the facts, however clear, are ignored.  Leaving a comfortable belief system means wading into the Great Unknown.  Its a scary place.  This fear of change and the unknown is why people stick to life-sucking jobs rather than quit, and is one of the reasons why men or women stay in abusive and horrible relationships long after they should have left.

I saw this first-hand recently in Tokyo.  Unlike giddy Californians proclaiming a "shut-in" day to protect themselves from what amounted to normal background radiation, Tokyo-ites downplayed any bad news even as radioactive Iodine spiked in their tap water.  They went about their routines and told themselves they were fine.  Even though the situation up north was getting worse by the day, ask a Tokyo-ite and they would laugh and say you've been watching too much CNN and BBC.

(to be cont.)
Posted by onedumbtravelbum at 9:43 PM