I stood cross-legged in the lantern light, or at least as best as I could.  In front of me sat the proprietor of En, a tea house in Gion, Kyoto.  She began.  Watching her was like watching a miniature ballet, each movement graceful, practiced, and with purpose.  She picked up a cup, removed her red sash, with one movement wiped the rim, turned it a quarter turn, wiped the rim, and turned it again.  The cup was placed again on the floor.  She repeated this movement for each utensil and item, purifying them for the tea.  The motions continued at a smooth pace, mesmerizing.  I was watching living Zen.  Eventually, she opened the lid to the matcha, or powdered green tea.  A little ritual spoon was used to place some of the matcha into the cup.  Then, after more ritual, the hot water was lifted from the stove and poured into the cup.  The cup was more like a little bowl, and it was actually quite a lot of tea.

Ballet of Tea
Before allowing us to drink the tea she finished ritually cleaning all the tools, and the ceremony did not finish until she actually gathered up her belongings, bowed twice, and shut the screen door behind her.  In the old samurai days, this would be when us men could begin to talk about important things.  But today it was just me and a Japanese mother with her daughter.  My samurai war discussions would have to wait.  Then she came back in and told us to drink.  But you can't just pick up the cup and drink.  You have to hold it the right way, with the name of the cup facing outwards in order to show respect to the cup maker.  This involves searching the cup for a little symbol that indicates the maker and turning the cup.  Only then did I consume the contents. 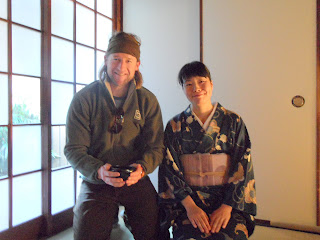 I have to say, I guess I wasn't sure what to expect but matcha tea is pretty weak and powdery.  Its not like premium green tea that you might buy at whole foods, with the leaves still intact with their oils.  Perhaps its just the way things used to be, maybe it was better to grind and dry the tea in order to allow it to keep.  But it was fine nonetheless, and I was happy to have witnessed the Way of the Tea, something many times older than the age of my young country.  I bowed to her and the other customers, ate my sweet, put on my shoes, and with fresh caffeine in my veins, headed out to buy a Katana!
Posted by onedumbtravelbum at 11:33 PM