After leaving the Meiji Shrine, I hopped the train down to Shibuya to check out another of the many cool neighborhoods in Tokyo.  Shibuya is famous for one of its busy street crossings, and is also one of the more upscale neighborhoods.  I tend to skip the shopping malls but I guess Shibuya is chock-a-block, and the giant Starbucks sign across the street pretty much said it all.  But hidden behind the broad boulevards are a maze of tiny colorful alleys full of strange pet stores, noodle shops, little designer huts selling all sorts of weird nitnacks.  I didn't get a chance to properly explore the place, its definitely worth a full day.  I was too fired up for the next spot: Akihabara!

In a nation that already is decidedly geeky, Akihabara is the crown jewel nerd nexus of the Japanese universe.  When I spilled out of the subway, the first thing that greeted me was a 5-story SEGA arcade!!!  I couldn't believe what I was seeing.  First of all, I didn't even realize Sega was still around, but for them to own a 5-story building in downtown Tokyo filled with arcade games blew my noodle.  My nerd-meter hit 11 and I practically ran inside to check it out.  I haven't really played games in an arcade for awhile, so needless to say I was pretty blown away with what I found on the first floor.  It was.... drumroll... endless rows of claw-cranes.  As Scooby likes to say... "huuuhh?".  Instead of some high-tech neon shooter-game, I was staring at row upon row of fuzzy pink bunnies, sheep, anime toys, school-girl pillows, you-name-it, all in claw-crane boxes.  Where was the good stuff?

Up on floor 2, I finally found it. 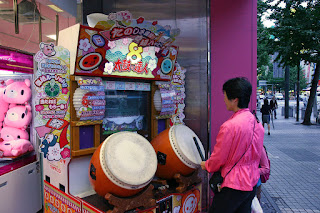 Here was the holy grail of arcade games... it was an insane 6-man cockpit seat setup for a team game, World of Warcraft-style.  There were only 2 guys duking it out, but they basically controlled giant samurai armies on huge big-screens, hucking swarms of arrows, rushing infantry into battle with swords, rows of cannons firing away, all in high-definition.  It was like watching a big-screen anime cartoon, with all the 1000's of individual soldiers dying gory awesome deaths.  The sound effects were deafening and perfect.  After that, I wandered off to a machine were a guy was banging away at a big drum.  He was pretty good.  On the screen were teen anime girls wearing their well-known plaid school-girl skirts.  I guess if he hit the right rhythms they danced around.

Then I found an even more absurd teen school-girl-watching game... basically this guy would hit a button when the matching icon fell down on the screen... but it was all just a way to pretend you were playing.  He was more focused on the movie playing in the background: a young girl in a bikini with ponderous cartoon breasts, jiggling and dancing around to Japanese pop music.

This theme of men voyeuristicly staring at teen school girls is pretty big in Japan.  Sararimen on the subway trains will have manga magazines open, or will watch anime on their cellphones.  And its best not even to discuss the weird world of hentai.  The whole theme comes to a strange meeting place at the maid cafes.  The concept is pretty simple: a bunch of very young woman (or teenage girls? its hard to tell) dress up in fantasy outfits (various maid costumes are the most popular), and serve insanely overpriced desserts or drinks in exchange for you to talk to and ogle them.  Talk about revenge of the nerds ... the guy gets to pretend he's Hugh Hefner for an hour, surrounded by hot young chicks dressed up in outfits.  But then again, I realize this is the exact same concept as Hooters.  Its just that in Akihabara, you get to pick what type of outfits you want them to dress in by going to different cafes.

I randomly met up with an American guy who said he had been to Tokyo 22 times.  He and his buddy were strolling around showing me the place, when he spotted some playstation gaming consoles.  They ran over and exclaimed how cool they were.  Apparently they were some rare purple see-through console you can't get in the US.  It was then that I realized that Akihabara is actually a proper tourist destination for nerds all around the world.  These guys were hard-core, and they were loving every second of the claw-machines, anime posters, 2-foot tall action figures, robot dogs barking around, maids walking around handing out flyers, and 5-story arcades.

(to be cont.)
Posted by onedumbtravelbum at 9:28 AM